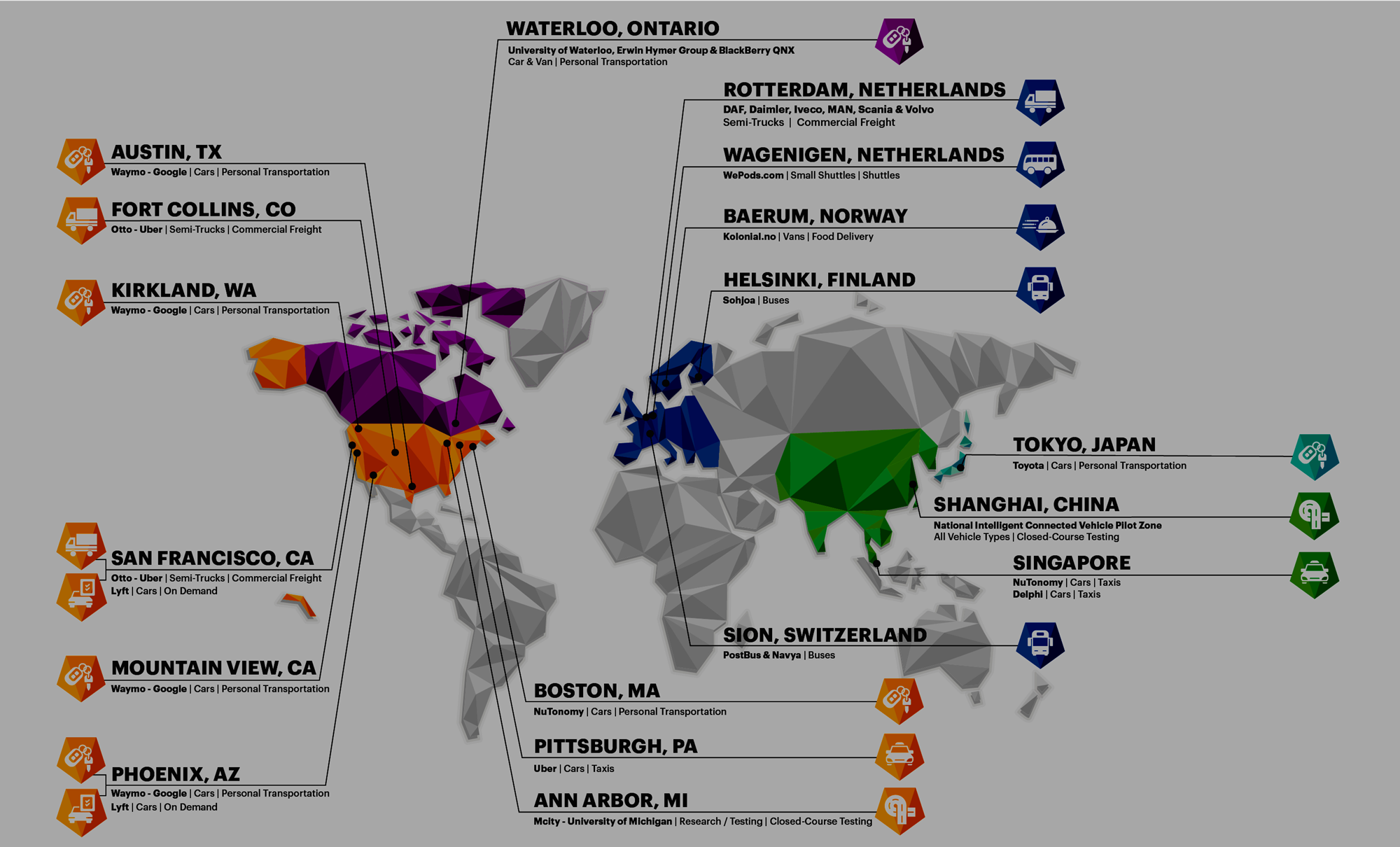 Around the world in self-driving cars: Europe

Posted on 25 January 2017 · By Accenture Insurance

In the first two parts of our series, we gave an overview of driverless-car pilot projects across the globe and examined the ongoing tests in North America in detail.

In the United States, most driverless vehicles in development are geared for personal transportation. Europeans, however, long known for their attempts to reduce traffic in their already congested cities and their concern for curtailing emissions, are taking a different approach to self-driving vehicles: One that focuses on public transportation.

Let’s take a closer look at where these trials are taking place in Europe. This map zooms into the European Union, and charts the deployment sites for self-driving buses, shuttles and more.

In Helsinki, rethinking public transportation has been a priority for government officials and academics. In summer 2016, several universities collaborated with the local municipality and the European Union to launch the Sohjoa bus project.

The cost-effective, energy-efficient, small electric buses carry up to nine passengers on a straight, quarter-mile route in the city’s Hernesaari district. The $1.2-million project will expand to two other cities in Finland in the next phase and continue through spring 2017.

SmartShuttles, a collaboration of PostBus with the city of Sion, Switzerland, predates the Sohjoa project in Finland by several months, but the service was suspended in September 2016 for two weeks after a minor accident. Manufactured by Navya, the two shuttles, named “Tourbillon” and “Valère,” have driven more than 1,000 kilometers (621 miles) and transported around 7,000 passengers on more than 800 trips through Sion’s old town.

In Norway, a different food revolution

In Baerum, a western suburb of the capital Oslo, small yellow buses featuring a sign that says “I am full of food from the internet,” in Norwegian, are slowly changing the way Europeans think of driverless vehicles. In November 2016, Kolonial.no, Norway’s biggest online grocery store, partnered with Acando, an IT consulting company, to test driverless buses for food delivery. The buses cost about $240,000, and are limited to driving at relatively slow speeds (40 kph or about 25 mph), but have stirred much excitement in this Scandinavian nation. Transportation Minister Ketil Solvik-Olsen calls the project “Revolutionary, driven by many smart people.”

Small is the next big thing in Netherlands

The Dutch government, local municipalities and 20 companies came together to debut WEpods in two cities, Ede and Wageningen. The electric pod was originally designed by French vehicle manufacturer and robotic specialists EasyMile, and developed for Citymobil2, an EU-funded project exploring automated road transport systems across urban Europe. The six-person vehicle has a maximum speed of 25 kph (15 mph) and drives on a fixed route from the Ede-Wageningen railway station to Wageningen University, and then on campus. In 2017, there are plans to add routes across the border into Germany.

The future of truck hauling across Europe

In April 2016, more than a dozen self-driving trucks made by six of Europe’s largest manufacturers arrived in Rotterdam in so-called “truck platoons” after completing the first-ever cross-border experiment of its kind, said Erik Jonnaert, president of the umbrella body representing DAF, Daimler, Iveco, MAN, Scania and Volvo. The self-driving trucks originated from as far away as Sweden and southern Germany. “Truck platooning” involves several trucks that autonomously drive in convoy and are connected via wireless, with the leading truck determining route and speed.

Jonnaert says platooning has the potential to improve fuel efficiency, and thus significantly reduce CO2 emissions from heavy-duty vehicles. However, differences in legislation between EU member states mean that it will take some time before the convoys become commonplace on European roads.

Join us next time, as we examine the driverless-car projects in Asia.

In the meanwhile, learn how autonomous vehicle technology could impact the insurance industry

Next Post - Around the world in self-driving cars: Asia