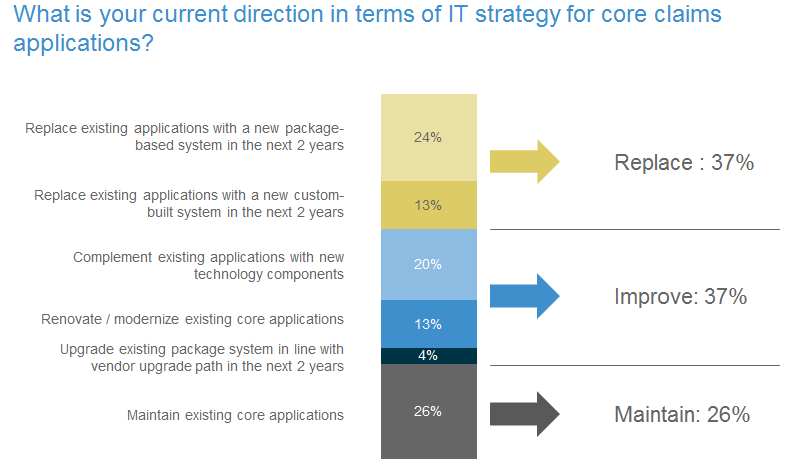 This post is the third in a five-part series about Accenture’s most recent EALA Claims Survey. Read the previous post.

European and Latin American P&C insurers plan to invest an average of €16 million over the next three years to improve their claims function. Are they being aggressive enough in transforming the function and the technology that underpins it? Not really, according to Accenture’s latest claims survey. The research indicates that many companies are improving claims in an evolutionary fashion rather than seizing an opportunity for profound and dramatic transformation.

Most claims executives in the survey agree that their organizations have critical IT challenges that hamper their ability to improve customer satisfaction and reduce loss costs. The most prevalent of these IT challenges are:

The prevalence of these challenges should surprise no one, since the majority of respondents are running core claims systems that are more than a decade old, and are using multiple applications to process their claims. Only 13 percent use one core system.

I’m really surprised to see that despite these challenges just two out of five respondents say their firms are planning to replace their existing applications with the rationalized, modern core applications they require to achieve a step-improvement in performance. The other three companies plan to simply complement, renovate, upgrade or maintain their core applications.

Of the 37 percent who are planning to replace their core claims applications in the next two years, about two-thirds will opt for a package-based system while the balance intend to custom-build their solutions. This marks a significant shift of approach for insurers, who until recently focused on custom-built systems. However, it is remarkable that there are still companies around wanting to build their own software, considering that a number of providers in the market have already invested a multiple of what such a company is able to spend in rich functionality and stability.

The trend indicates that at least a few insurers are beginning to appreciate the benefits of packaged applications that are quick to deploy, easy to maintain and agile. I expect to see these companies put some blue water between themselves and their less far-sighted competitors.

*Next time, we play detective as we explore how claims analytics is helping insurers combat fraud.

Enabling a mobile-empowered claims workforce: Keys to success (Part 5 of 5)

Enabling a mobile-empowered claims workforce: Peek into the future (Part 2 of 5)

Insurance Chart of the Week: Choosing the Right Path to Improving Claims Systems